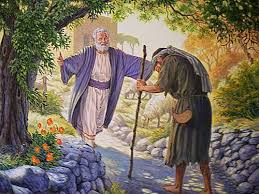 I am praying for some people, I call them prodigals, meaning that they have left the people who love them, and/or lost their direction/destiny and/or are entrapped and taken captive through wrong and deceptive thoughts/behavior.  Today, I was worshiping with a song of surrender.  This act of surrender is so sublime that I was caught up in the Spirit, desiring to lay aside everything and surrender afresh to the Living God exalted above the heavens.  At this point, I had a glimpse of these prodigals lifting arms reaching out to God in surrender.  Joy overflowed in my heart to see these return and join me in a desperate complete surrender to Father God.  Praise God from whom all blessings flow.  There is no greater or just act than to completely surrender to God and cry out that He would have His way with us.

This is my prayer for you who read this: may you come to the end of yourself so that you cry out to the Living God and hear His voice in your inner being saying, “I will never leave you nor forsake you.”