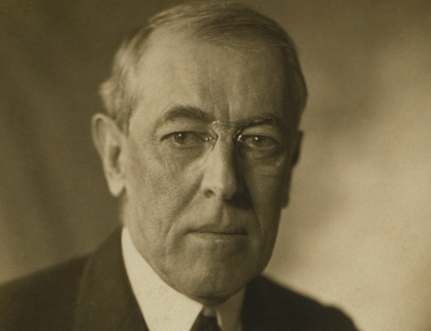 The twenty-eighth President was the son of a Presbyterian Minister and was a Calvinist himself. He had a deep faith in God and His direction of the Elect, God’s children. His Christian world view of love, charity, and  justice impacted his life and Presidency. He was a Southern child during the end of the Civil War and experienced it’s devastation, but as a Christian he believed he had a destiny. He overcame dyslexia after struggling for years as a poor student, and was able to become an eloquent speaker and persuasive debater through the consistent help of his loving father. He learned to write short-hand which opened his academic horizons. He wanted to go into politics, but became a very successful professor and at age forty-six became the president of Princeton University.

During the recession of 1894 he spoke out against the ultra wealthy corporate power elites who had combined to oppress and harshly use the working man. Not long afterwards, Wilson suffered blindness in one eye from hypertension and was told by his doctors that he must live a retired life. This was the death of his vision of greater influence, but with rest and the help of his loving wife and family he recovered fully.

At just the right time a powerful Democrat party boss found Wilson and offered to support his campaign for the Governor of New Jersey. He won and set out to implement what was first labeled a “progressive” agenda which included, antitrust laws, workers compensation, etc. He later became a candidate for President with the Democrat party against Taft the Republican incumbent. But Teddy Roosevelt and Socialist Eugene Debs were also running. Wilson was against the big corporations monopolistic influence over the mass of individual Americans, whom he believed were those who should be directing their own democratic government. He won with 43% of the popular vote, certainly not a landslide, but he had championed the concerns of the middle class. He was the first president in 113 years to address the public directly. When the chairman of the Democrat party came requesting a high government position given that the Democrat party had made him President he replied, “It was God who made me president, not the Democrat party.” He helped establish the individual income tax, labor laws to improve working conditions and other reforms for the working man. He supported segregation which was the law at that time and joined with a group of Southern congressman who supported it. His “progressive” influence was necessary as the working man was at the mercy of an oligopoly of selfish industry barons who exerted far more influence than necessary in a democratic republic.

When the democratic government of Mexico was over thrown by socialist rebels he sent troops into Mexico to restore democracy. Yet, in 1914 when Europe took sides setting the stage for war, Wilson asserted that America had no interests in European matters. Though he had little experience in foreign affairs, he set a long standing policy of limiting foreign involvement to specific American interest. When America was finally drawn into the war, he supported laws that suspended free speech, which is unconstitutional and therefore shameful for any President. He tried to organize the League of Nations, which was his greatest dream, but became his greatest failure as it was never ratified by the Senate. Wilson’s good intentions to eliminate war on earth would have been better served if he had read his Bible closer and understood that man can not be his own global collective security organization given that the position is already held by God Almighty. (Gen. 49: 10; 2 Chron. 20: 6; Job 12: 23; Ps. 2: 1-8).

Woodrow Wilson is a darling of progressive liberalism and those times and circumstances did warranted action to break up the strangle hold corporate industry elites exerted upon individuals. Progressive liberalism has not been required since Wilson left office, and it has progressed into socialism today. Nevertheless, the framework of Wilson’s antitrust laws need to be effected today against the oligopoly of enormous multinational media/internet corporations that wield far too much bias, fraudulent and anti-American influence against the individuals for whom and by whom our constitutional republic was instituted.