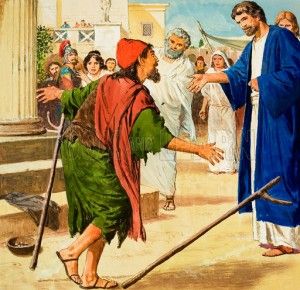 “Jesus left the synagogue and went to the home of Simon.  Now Simon’s mother-in-law was suffering from a high fever, and they asked Jesus to help her.  So he bent over her and rebuked the fever, and it left her.  She got up at once and began to wait on them.” (Luke 4: 38-39).  Who has ever prescribed a rebuke to relieve a fever?  When you hear “faith and healing” do you think of charlatans and fakes who deceive people in order to get money?  Have you dismissed all healing except by modern medical science?  If so, are you taking a position contrary to scripture and the clear teaching of Lord Yeshua?

Is it possible that certain infirmities or afflictions are the result of demonic oppression?  Is faith in God through Yeshua effective for physical and mental health, or has God substituted doctors and medicine instead of faith?   A boy was brought to Yeshua, they said “He has seizures and is suffering greatly.  He often falls into the fire or into the water.”  The disciples could not cure the boy and asked why.  Yeshua replied, “Because you have so little faith.  Truly I tell you, if you have faith as small as a mustard seed, you can say to this mountain, ‘Move from here to there,’ and it will move.  Nothing will be impossible for you.” (Matthew 17: 20).  Some may think this was two thousand years ago, even before the middle ages where blood letting and dung poultices where offered as cures, and is not relevant today.  Very recently it was discovered that the hormone replacement treatment given to post menopausal women for over twenty years actually harmed their heart, contrary to claims that it was heart healthy.  How often is the diagnosis an autoimmune state, meaning your body is attacking itself?

“Jesus called his twelve disciples to him and gave them authority to drive out impure spirits and to heal every disease and sickness.” (Matthew 10: 1).  Yeshua didn’t instruct them in this procedure, although they surely watched as He delivered and cured the sick.  If it is by faith, then where is the need for analysis, diagnosis, examination, indications and all the rationalization of physicians?  Of course, modern medicine has its place, but is it the only way and does it replace our faith?  The disciples failed to cure the boy mentioned above, where was the deficiency?  When Yeshua was not able to do many miracles in a town, what was the inhibiting factor? (Matt. 13: 58).  The problem is with a lack of faith, no confidence in things hoped for, nor any evidence of things currently unseen.

So, where does the faith come from and why is it sometimes insufficient?  “Consequently, faith comes from hearing the message, and the message is heard through the word about Christ.” (Romans 10: 17). ” In Lystra there sat a man who was lame.  He had been that way from birth and had never walked.  He listened to Paul as he was speaking.  Paul looked directly at him, saw that he had faith to be healed and called out, ‘Stand up on your feet!’  At that, the man jumped up and began to walk.” ( Acts 14: 8-10).  Who’s faith is required, the healed or the healer?  “Jesus went on from there, two blind men followed him, calling out, ‘Have mercy on us, Son of David!’  When he had gone indoors, the blind men came to him, and he asked them, ‘Do you believe that I am able to do this?’  ‘Yes, Lord,’ they replied.  Then he touched their eyes and said, “According to your faith let it be done to you…’ ” (Matthew 9: 27-29).  You may recall the woman who had a bleeding disorder, “Jesus said, ‘Someone touched me; I know that power has gone out from me…’  Then he said to her, ‘Daughter, your faith has healed you.  Go in peace.’ ” (Luke 8: 46, 48).  In the disciples failure, their faith was insufficient, in these latter illustrations healing faith was in the infirmed.  So, it seems there is a need for faith and the more widespread the better, dismissive unbelief in either party is a problem.

Have you ever prayed with uncertainty, just wishing for healing, rather than asking and expecting a response?  Were you so filled with dread and doubt that you lost hope?  When we do not pray or do not go to the sick person, as we are able, we have no or little faith.  When we recall the Word of God as to His promises; as to His command to ask; as to His great mercy and compassion that is new every morning, then faith is rising.  When we believe in what seems currently impossible, we are evidencing faith that the future can be different by God’s Almighty unlimited power and love.  “Jesus replied, ‘What is impossible with man is possible with God.’ ” (Luke 18: 27).  When you hear bad news or circumstances that seem dire, do not give in to despair.  Stir up your faith in God, if necessary, open the Bible and read, research and affirm the mercy and unceasing compassion of God toward His people.  Remind yourself that Yeshua said to ask and you will receive, anything in His name.  Diminish the problem and exalt the Lord.  “He heals the brokenhearted and binds up their wounds.  He determines the number of the stars and calls them each by name. Great is our Lord and mighty in power; his understanding has no limit.” (Psalm 147: 3-5).  God has graciously given much healing through doctors, but it is too easy and inappropriate to give more credit to medical science than our merciful Father God.  We should put our confidence and faith in God and see the doctor as His instrument.  Help us Lord to look to you our healer.