Take Down All Racists Symbols on Public Grounds 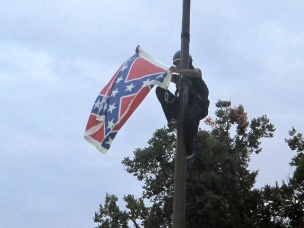 If our country is going to take down all Confederate symbols from public grounds due to its past association with slavery and racism we should not stop there but take down all racist symbols on public grounds.  This would include the American flag, the Washington Monument, as well as the Lincoln and Jefferson Memorials.  George Washington and Thomas Jefferson were slaveholders and Lincoln was an avowed racist holding the opinion that white people where superior to black people even while being opposed to slavery.

Slavery existed in America for nearly two hundred years before the formation of the confederacy. The New England colonies established slavery a full generation before the South and were responsible for much of the slave trade even after it abolished slavery. The Confederate flag should not be penalized for being flown by a racist that committed the Charleston murders as racist of this type also routinely fly the American flag.

To speculate that General Lee would favor removing the flag if he were alive today, as some have suggested, is speculative at best. It is true that General Lee was not in favor of reminders that would only serve to stir up strife.  However, considering the state of the Union today with the Supreme Court creating laws, Presidents ruling by edict and traditional values under attack he may well have taken the flag down himself and marched with it on Washington.

We should not attempt to fight racism by discriminating against Southern symbols. Symbols do matter and I have no problem regulating the Confederate flag to museums as long as all national racist symbols are also taken down. Perhaps we can just wipe out our history and start over.