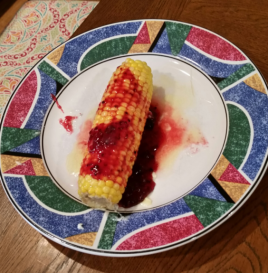 In the middle of a dream, while I was still asleep, He gave me a recipe -“Blackberry jam on hot buttered corn on the cob”.  It is as difficult as anything to eat without making a mess, so lay down any pride you have in your own self-respect.  It’s the taste of summer all slathered together, dripping, gnawing, using your hands and your mouth wide open.  Have a tooth pick ready because kernels and seeds will get between your teeth, but you will be transformed by the aroma and taste of two summer specialties never before combined in contrasting colors of purple and yellow.

This recipe is from my closest friend who amazes me with his creativity and we hang out everyday.  Would you know Him at his own Birthday party?  He’s the only one who promised to return and set things right, but will you recognize Him when He comes?  I’m speaking of things that are yet to come.

Yes, you need to know Him, but more importantly, you need Him to know you.  If all the famous and adored people on earth wanted to be with you, but it would count for nothing.  This is the one person who means everything – Yeshua Messiah.  You have disappointed Him, but He has not forgotten you.  He calls you by name.  He did not reject Peter, although Peter denied knowing Him.  If Yeshua knows you He will not deny you. Have you been chasing after things that are meaningless, people who don’t know you. Stop and return to the one who loves you with an everlasting love; the one who calls you to Himself.