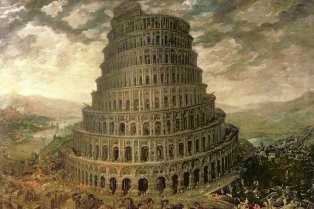 There is a renewal coming that will bring the nations into a new era of peace and favor.  Throughout history, evil, war, and poverty have had the spotlight and microphone of the world’s stage, until a natural disaster occurred to temporarily switch the theme from acts of man, to acts of God.  Even so, there is a unique event in history that is instructive, but seldom recounted.  Those who went to Bible class as children were taught about the Tower of Babel, but within the full story is a picture of God’s Sovereignty and love for mankind.

The whole world had one language and a common speech.  Then they said, “Come, let us build ourselves a city, with a tower that reaches to the heavens, so that we may make a name for ourselves; otherwise we will be scattered over the face of the whole earth.” (Gen. 11: 4).  In seeking to make a name for themselves, they demonstrated an objective of pride.  It was God’s intention that the entire earth be populated saying,  “…fill the earth and subdue it…”. (Gen 1: 28).  “For this is what the Lord says—he who created the heavens, he is God; he who fashioned and made the earth, he founded it; he did not create it to be empty, but formed it to be inhabited—he says: ‘I am the Lord, and there is no other.’ ” (Isaiah 45: 18). Men knew this but considered being “scattered” a curse rather than a blessing spoken by God.  The purpose of men was to prevent mankind from going into all the earth.  They knew that they would disperse themselves, unless some action was taken to prevent it, so they decided to build a tower to the heavens in their pride.

“The Lord said, ‘If as one people speaking the same language they have begun to do this, then nothing they plan to do will be impossible for them.’ ” (Gen. 11: 6).  God had equipped mankind to accomplish great things and He had given an ambitious charge to them in subduing the earth.  He saw in the future they would travel to the moon and did not stop them because it was not for pride that they went.  Scripture clearly says, “Pride goes before destruction”, so God confused the language of the whole world; they stopped building and from there the Lord scattered them over the face of the whole earth. (Prov. 16:18; Gen. 11: 7-9).  This is where ethnicity was born as families dispersed, remaining in language groups isolating various genetic similarity. (Gen. 10: 32).

The most unique and amazingly wonderful event in human history happened about two thousand years ago in Bethlehem, Israel, with the incarnation of God as Yeshua, Messiah, the Ruler over Israel.  “Therefore Israel will be abandoned until the time when she who is in labor bears a son, and the rest of his brothers return to join the Israelites.” (Micah 6: 3).  The Lord will call from the diversity of all ethnicity men and women, whom He calls brothers, to join Israel’s King.  “The remnant of Jacob will be among the nations, in the midst of many peoples, like a lion among the beasts of the forest, like a young lion among flocks of sheep, which mauls and mangles as it goes, and no one can rescue. Your hand will be lifted up in triumph over your enemies, and all your foes will be destroyed.” (Micah 6: 8-9).  The Lion of Judah, King Yeshua, will lead Israel and the nations of believers to victory destroying, witchcraft, idolatry and those who promote them, bringing about a time of great peace.  “He says: ‘It is too small a thing for you to be my servant to restore the tribes of Jacob and bring back those of Israel I have kept.  I will also make you a light for the Gentiles, that my salvation may reach to the ends of the earth … Then all mankind will know that I, the Lord, am your Savior, your Redeemer, the Mighty One of Jacob.” (Isa. 49: 6, 26).  “They will neither harm nor destroy on all my holy mountain, for the earth will be filled with the knowledge of the Lord as the waters cover the sea.  In that day the Root of Jesse will stand as a banner for the peoples; the nations will rally to Him, and His resting place will be glorious.” (Isa. 11: 9-10).  In that day the nations will know peace and favor in unity and love in surrender to the one and only Lord and King Yeshua Messiah.

Some of Our Followers