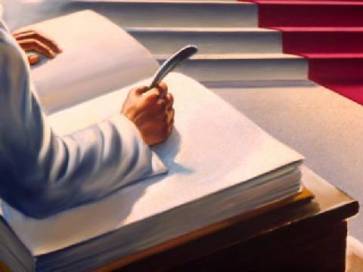 God is interested in His people, those who believe, because He opened their eyes and redeemed them through the blood of His only Son.  The prince angel Michael is assigned to protect God’s people. (Dan. 12: 1).  The Hebrew prophets recount God’s messages regarding the future.  Numerous prophets foretell great trouble, natural disasters, and times of distress in the last days, as well as the Revelation given to John the Apostle.  Daniel is told, “There will be a time of distress such as has not happened from the beginning of nations until then.”  There were terrible events before the nations were estsblished, such as the flood, but since nations were established by God no greater distress will be seen until that time.

However, believers are reassured, “But at that time your people—everyone whose name is found written in the book—will be delivered.”  The book refers to the “Book of Life”, which contains the names of the righteous, those who are made righteous by the blood of the Savior, Yeshua Messiah.  The Psalmist spoke of the wicked, “May they be blotted out of the book of life and not be listed with the righteous.”  Revelations records in detail, “And I saw the dead, great and small, standing before the throne, and books were opened.  Another book was opened, which is the book of life.  The dead were judged according to what they had done as recorded in the books.” (Revelation 20: 12).

In the end, everyone who ever lived will rise for judgment day.  The wise and those who lead many to righteousness will encounter everlasting life, but others will find shame and everlasting contempt.  “Many will be purified, made spotless and refined, but the wicked will continue to be wicked.  None of the wicked will understand, but those who are wise will understand.” (Daniel 12: 10).

When Daniel received this prophecy he was confused and asked when it would happen.  The reply was, “Go your way, Daniel, because the words are rolled up and sealed until the time of the end.”  Prophecy is like a light shining forward as it enlightens a path in the future, as we near, reach and pass along that path we see that the light was perfectly accurate, and it testifies to the Almighty Sovereignty of God.  Every word of God proves true.

Our only hope is found in Yeshua Messiah and in Him is an assurance of deliverance.  If any of this future reality scares you or gives you concern, turn to Him in prayer, seek him with all you soul, mind and strength.  He is seeking you more than you are seeking Him.  He knocks on the door of our heart, will you open your hearts door to Him?