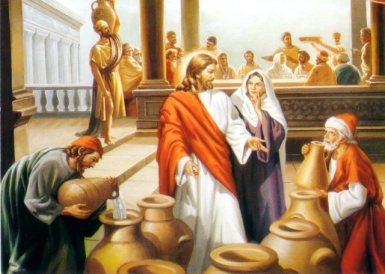 Mary, His mother, had a faith that was deep, such that, she said very little.  Consider her at the wedding feast were she said to Yeshua, “They have no more wine.”  To the servants she said, “Do whatever he tells you.” (John 2: 3, 5).

John, the Baptist, was Yeshua’s relative, and His love is reflected in His affirmation of Messiah, “I baptize you with water for repentance.  But after me comes one who is more powerful than I, whose sandals I am not worthy to carry.  He will baptize you with the Holy Spirit and fire.” (Matthew 3: 11).  He said, “I have seen and I testify that this is God’s Chosen One.”  Also, “Look, the Lamb of God!” (John 1: 34, 36).  Yeshua said there was no greater man than John the Baptist.

Mary, Martha and Lazarus were friends of Yeshua.  He spent time with them and He raised Lazarus from the dead after four days.  These three friends expressed a close relationship to Yeshua.  “This Mary, whose brother Lazarus now lay sick, was the same one who poured perfume on the Lord and wiped his feet with her hair.  So the sisters sent word to Jesus, ‘Lord, the one you love is sick.’ “  Scripture says, “Now Jesus loved Martha and her sister and Lazarus.” (John 11: 2-3, 5).  Mary’s anointing of Yeshua’s feet with perfume has no equal in scripture.  Yeshua wept with compassion for Mary’s anquish and the onlookers said look how He loves them.

John, the Apostle, refers to himself as, “the disciple whom Yeshua loved” numerous times in his gospel.  John was close to Yeshua and was selected to recieve the Revelation of the end times.  Yeshua gave John charge of Mary, His mother, from the cross.  “When Jesus saw his mother there, and the disciple whom he loved standing nearby, he said to her, ‘Woman, here is your son,’ and to the disciple, ‘Here is your mother.’  From that time on, this disciple took her into his home.” (John 19: 26).  It is great love that bridges the family dynamic.

Mary Magdalen was a follower of Yeshua and went early to the tomb.  She witnessed first the resurrected Lord.  She was weeping at not finding him, but angels and the Lord appeared to her.  “Jesus said, ‘Do not hold on to me, for I have not yet ascended to the Father.  Go instead to my brothers and tell them, I am ascending to my Father and your Father, to my God and your God.’ “  “Mary Magdalene went to the disciples with the news: ‘I have seen the Lord,’ and she told them that he had said these things to her.” (John 20: 17-18).  She desired to embrace the Lord out of her great love and joy.

Peter, the Apostle, was one who made great confession of faith and also denied the Lord, but the Lord called Peter specifically to meet Him after the resurrection.  Their the Lord reaffirmed Peter’s love asking three times and getting three responses from Peter.  “The third time he said to him, ‘Simon son of John, do you love me?’  Peter was hurt because Jesus asked him the third time, ‘Do you love me?’  He said, ‘Lord, you know all things; you know that I love you.’  Jesus said, ‘Feed my sheep.’ (John 21: 17).  Yeshua said that His church would be built on the rock of Peter and begat a prominent leader.

There are many more that could be mentioned, but in these examples we see Yeshua first loving those who loved Him.  If you know Yeshua, I believe it’s the same with you and I.  He found us and His lovingkindness and mercy flooded over and in our heart; we responded with the love we could muster in submission and surrender.  Until this time that relationship has grown, mostly because of His faithfulness, but also because everything He promised is being realized and we have become his workmanship, His friend, His brother/sister and one among the multitudes of those who love Yeshua.  If you enter into the Spirit, you will know His love as fresh, real and strong as ever – now.