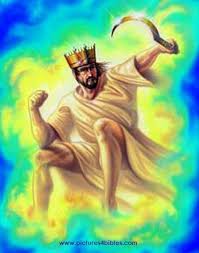 “I looked, and there before me was a white cloud, and seated on the cloud was one like a son of man with a crown of gold on his head and a sharp sickle in his hand.  Then another angel came out of the temple and called in a loud voice to him who was sitting on the cloud, ‘Take your sickle and reap, because the time to reap has come, for the harvest of the earth is ripe.’  So he who was seated on the cloud swung his sickle over the earth, and the earth was harvested.” (Rev. 14: 14-16).  In this vision, the Son of man, who Yeshua most often referred to himself, had a sickle in his hand.  At the appointed time He swung it and harvested the earth.

Of what did the harvest consist?  Yeshua appointed seventy-two people to go out,  “He told them, ‘The harvest is plentiful, but the workers are few.  Ask the Lord of the harvest, therefore, to send out workers into his harvest field.’ ” (Luke 10:2).  They were sent to heal the sick and proclaim the coming Kingdom of God.  They returned reporting that even the demons submitted.  It may be that the oppressed appeared to be sick and were delivered as healed, but the harvest was among people.

Father God, creator of the universe, Sovereign Lord Almighty is gathering a harvest of souls, daily as people die and upon the return of Yeshua at the end of time.  Time will end when the earth is destroyed in fire and a new heaven and earth are created for the righteous. (2 Peter 3:10).  This is God’s plan from the beginning, to have eternal fellowship with His greatest creative act, making man in His own image.  I say greatest, because Messiah Yeshua was a man like us and He is supreme in all creation.  “The Son is the image of the invisible God, the firstborn over all creation.  For in him all things were created: things in heaven and on earth, visible and invisible, whether thrones or powers or rulers or authorities; all things have been created through him and for him.  He is before all things, and in him all things hold together.  And he is the head of the body, the church; he is the beginning and the firstborn from among the dead, so that in everything he might have the supremacy.” (Col. 1: 15-18).

God orchestrates and by His will brings this about, even down to the individual, whom He chooses, enlightens, empowers, and recreates.  He prepares good works for them to do, He sends them out, ministering to their brothers and forms the family of God and a living temple in which He dwells.  He forgives their sin through Messiah Yeshua and releases the light, love, glory, majesty, power, and truth of Himself through them.

We are like flowers that spring up and wither in a few days; we die in this brief life and live in the eternal glory of God’s presence thereafter.  We are made by and through water.  “But they deliberately forget that long ago by God’s word the heavens came into being and the earth was formed out of water and by water.” (2 Peter 3:5).  I remember hearing the remarkable statistic that we are 98% water.  However, it is not water that Yeshua brought into the world, but light.  Yeshua said, “…I am the light of the world.” (John 9:5; 8:12).  We reflect His glory, His light. (Matt. 5:14; 2 Cor. 3:18).  Light is infinite, unlike water which is temporal.  First God said, let there be light.  Light is so little understood that we really don’t know what it is; two theories suggest it is either partical or wave.  All that is known has to do with its nature and effects upon other things.  It is like live itself, science does not understand why, how, or when life is sustained or initiated, although they have learned much about healing and sustaining life in limited circumstances.  Yeshua is light and life.

At the right time we enter this world and leave it.  We all have dread of the unknown, death not withstanding.  Yeshua knew what a terrible death He faced and asked whether there was another way.  It was faith in God His Father that brought Him through and so it is with us.  Believers are destined to be God’s harvest of souls.  Can your self accept that fact that you are a servant, a created being, a subject of the Most High God, albeit a loved and valued one?  “But you have come to Mount Zion, to the city of the living God, the heavenly Jerusalem.  You have come to thousands upon thousands of angels in joyful assembly, to the church of the firstborn, whose names are written in heaven.  You have come to God, the Judge of all, to the spirits of the righteous made perfect, to Jesus the mediator of a new covenant, and to the sprinkled blood that speaks a better word than the blood of Abel.” (Hebrews 12: 22-24).