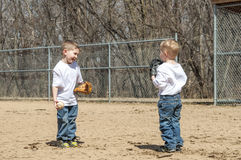 I had a very good dream.  I was playing catch with my good friend.  We were both young, it was a fine sunny warm summer day, the grass was green and fresh. We were simply throwing a ball back and forth to each other.  This is great fun.  The simplicity of throwing and catching a ball thrown into the air allows ones mind to dream and float along with the ball until with a great sense of accomplishment, completion and satisfaction the catch is made.  There are no rules, just throw the ball and catch or retrieve it in order to throw it again.  Among boys you find a great variety of throwing and catching styles and techniques that are employed as they imagine being a great pitcher in the World Series, or running down a fly ball and making the catch just before the ball goes over the wall for a home run.

Another dimension to playing catch, which we called “pitching”, is the fellowship that is held with your friend.  You can stand somewhat close together as you warm-up and talk. Talking is not as natural to boys as it is with girls, but the action of pitching satisfies something or enables something in our minds that is designed to share.  Great conversations can take place while pitching.  The movie, “Field of dreams”, romanticizes the entire idea of baseball, but depicts the most intimate quality as a son having “a catch” with his father.  In the end of this truly crazy fantasy of a movie, we discover that it was all about the relationship that a son needs with his father.  That is so true, on so many levels, that even an utterly absurd movie such as Field of Dreams makes sense.  The relationship of Father and son is the central theme of the universe.  The creator Father God sends his son, Yeshua, as the Savior of all other humans who have become estranged from their Father God.  The Son fulfills every word, act, intention, with perfect timing, unselfishly because of His love for the Father.  The Father gives His one and only son for all the sons (and daughters) who are lost and separated from Him.

So, as we pitch and talk we share our hopes and plans, our failings and unfulfilled longings, whatever is on our heart and mind, but at the center of all our being is Father God Almighty.  He transcends all words, all activity and connects with us Spirit to Spirit, which makes everything so good, so full of love, with such true and pure emotion that it is like a dream of two children playing catch on a bright summer day.