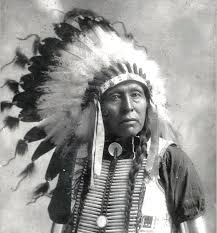 Historically, American Indians (Native Americans) have been held in high honor among the majority of American society.  Beginning with the first settlers to the “New World”, Indians are depicted as honorable Peoples.  The distinctively American holiday, Thanksgiving, includes the story of the Indians sharing food with the Pilgrims.  The early westward explorers and settlers encountered natives such as the Cherokee tribes who were integrated into early American culture by accepting Christianity in significant numbers.  As confirmation it is not unusual to encounter recorded in early censuses’ “Full blooded Indian” in the family line of older American names.

In the 19th Century many writers began documenting the Indian tribes way of life as it was in rapid decline.  The term, “the Noble Savage”, was adopted to romanticism how the Indians lived off the land in a natural and unrestricted way.  Irrespective of the origin, exact meaning, or whether it was warranted, the reference is complementary.  When the national baseball and football professional athletic leagues were established, many teams selected Indian names such as, “Braves, Indians, Chiefs, or Redskins”.  These names were chosen because they were honorable and would reflect favorably on their teams and supporters.  In the Boy Scouts, the highest names of honor and respect are designated with Indian names and references.  Over the years very successful movies have been made that depict with honor and respect the American Indian tribes.  As recently as 1990, “Dances with Wolves”, and 1992, “Last of the Mohicans”, idealized the American Indian with honor and respect.

There is much dispute regarding the history related to the indian wars, skirmishes, attacks, raids, and who incited these.  We know that horrible massacres took place on both sides.  Overall, it is of little doubt that the early American government reneged on it treaties, agreements, and treated the Indian tribes unjustly.  Andrew Jackson’s removal of the Cherokee Indians via the trail of tears and his vicious war on the Seminole people stand as terrible atrocities in American history.  However, American history is full of triumphant as well as abominable events, including four years of Civil war.  History is not what dictates the future, nor can it be remedied or fixed.  “Righteousness exalts a nation, but sin condemns any people.” (Proverbs 14: 34).

In recent years, the Liberal Media began to promote its definition of political correctness and it’s associated revision of history.  A primary target was the elimination of all references to Indians.  History revision was the objective, as there was no objection initiated by any Indians for almost a hundred years; names were said to be derogatory, but it was clearly based in honor and respect, as no one names their team after something they don’t honor or respect.  What’s so bad about recognizing the Indians, their bravery, devotion to family, survival skills, and respect for nature?  What is thought to be bad by the Liberal Fascist Socialists is the history and foundations upon which this country is established.  These liberals think they are better than anyone else and that America should be fundamentally transformed.  What kind of new nation would this transformation reveal?  Those who promoted this never answered the question, nor did their partners in the liberal media even ask.  However, the new Liberal Fascist will not stop with a major history revision, redefining marriage, and quadrupling the national debt, they have a vision of this country that is too shocking and alarming to admit.

History revision is only the small tip of a submerged iceberg that is the secular humanistic America, a ruined, weak, captive, hate-filled, and wicked nation.  In spite of all the shameful events in American history, the fact that America was founded on Judeo-Christian principles of God, freedom, liberty, and justice for all, stand as a light in a dark world of tyranny.  God alone can be praised for this and the favor and blessings that resulted.  Lord, God Almighty have mercy on us and turn us back to you.  “All the ends of the earth will remember and turn to the Lord, and all the families of the nations will bow down before him, for dominion belongs to the Lord and he rules over the nations.” (Psalm 22: 27-28).