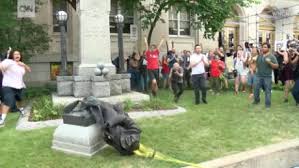 The new Liberal Socialist Fascist protesters are seeking to tear down statues and monuments from the past. They believe they are doing good and that they are right to do this, to protest what they find offensive.  Those who raised the statues where honoring men and women, for their courage or ideas or whatever was honorable at the time.  People don’t erect statues of villains or reprobate criminals, but no man is perfect, except the God/Man, Yeshua Messiah.  It may have been that everyone did not agree with these memorials at the time they were created or thereafter.  However, memorials and statues are free speech, like flags and other symbols.  In downtown Nashville the government put up a statue of four naked women and men holding hands in a circle. It was art and had some obscure message, (most obviously that public nudity is acceptable), but many did not appreciate it.  Still, it stands there today.

If the Liberal Fascist Protesters want to send their message they are free to do so.  If they wish to honor that which they believe is honorable, they can do it and erect a statue to one of their fascist heroes if they want.  However, they may not be interested in honor, they may only be interested in destroying that which others honor.  In which case, they must be restrained, jailed, prosecuted, fined, and otherwise prevented from carrying out their purpose of forcefully mandating their will on others.

This is a free society, Liberal Fascist abuse freedom in violation of that of our entire society.  Violent unlawful mobs, such as those seen lately, tempt and taunt our civil protectors, potentially to drastic measures, to thwart anarchy.  Everyone should understand that the Liberal Fascist organizers are not law-abiding people with good intentions; they prey on simple-minded, ignorant and gullible youth.  Their goal is to bring destruction to America with riots, angry mobs, illegal abuse of freedom to force their fascism upon the rest of us.  They may disguise themselves as civil rights protestors, anti-war protestors, or democrat party activists, but their aims, means, and ways are contrary to true and just non-violent protestors like Dr. Martin Luther King, Jr. and most of the anti-war protests of the Vietnam era.

I suggest that they erect some new memorials of non-violent protestors, but they will not be unique, because we have them already in abundance.  Beware of the rise of Neo-Socialist Fascism in disguise.  In the worst case scenario it will precipitate an excessively harsh government response that will also cause a loss of civil liberty. Amazingly, this would satisfy the Liberal Fascists as well, because their goal is the destruction of freedom, liberty and America as we know it.  The silly dupes who are submitting to and cooperating with these manipulators will not be innocent either.

This is a dire depiction and explanation of what is happening in a small segment of American society today.  It is contrary to my general belief and hope in God’s mercy and grace, but He is also just, so the lost are destined to the wrath to come.  However, the just (righteous) shall live by faith, and to them, I say, “I tell you, my friends, do not be afraid of those who kill the body and after that can do no more.  But I will show you whom you should fear: Fear him who, after your body has been killed, has authority to throw you into hell.  Yes, I tell you, fear him.” (Luke 12: 4-5).