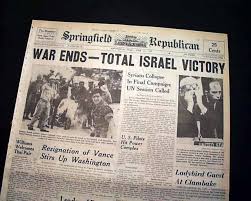 I  have seen several public service announcements on bullying.  How bad it is and that it should not be tolerated in our schools and neighborhoods. Many of us have been tormented by Bullies.  Historically, Gay men have been a favorite target of bullies. However, there is one place where bullies are encouraged, rewarded, and acclaimed with praise.  It is the world stage of nations, most notably represented by the United Nations.  Their perennial target is small quiet Israel.

Israel was created in 1947 by the UN, shortly after Hitler’s Germany executed six million Jews.  The land of Israel was infested with malaria, a neglected wilderness. The only inhabitants were transient Arabs.  Yet, in a mere twenty years the Israelis had transformed that wilderness into a garden.  The surrounding Arab nations of, Egypt, Syria, Jordan, Lebanon, and Iraq planned a joint unprovoked attack against Israel.  Israel found out about it and launched a preemptive defensive strike.  The subsequent war lasted six days with Israel being drastically out numbered in troop strength and armament.  However, Israel was victorious and occupied the surrounding areas it captured during the war in order to provide a minimal and adequate defense against future attack.  The Arabs in Israel and areas obtained during the war remained unharmed and unharassed.

Ever since the surrounding Arabs nations and many other supportive Muslim nations have committed themselves to the destruction of Israel.  We have seen many strategic initiatives by Israel’s enemies; acts of terror, political warfare, fained attempts for peace, propaganda warfare, and most recently, missile attacks from territories given over by Israel in exchange for peace.  These muslim nations file hundreds of punitive resolutions against Israel every year.  They control the agenda of the UN, so that it accomplishes nothing worthwhile.

Through the years Israel has given land and many considerable concessions in its efforts to secure a true and lasting peace.  These sincere attempts for peace by Israel have been met with deception, warfare, and all sorts of terrorism.  Nevertheless, Israel is labeled the aggressor, oppressor and the barrier to peace by the Nations. Until very recently America has been a loyal friend and has stood with Israel, but the liberal democrats have sided with and taken up the cause of the Bully terrorist nations of the world.  They support terrorist nations over the only free democracy in the middle east.  It is shameful to promote bully nations, while condemning the behavior of grade school bullies on the playground.  The fascist liberal democrat/media are hypocrites who support regimes that kill and persecute the innocent, yet pretend to have an interest in those who are mistreated.

All these aggressor nations have been unsuccessful and the liberal Democrat media will be equally thwarted, because God has promised to favor, bless, and establish the nation of Israel.  No people group has existed as long and distinct as Israel, particularly considering they were dispersed throughout the nations.  No people group has produced more great scientists, mathematicians, or engineers as evidenced by the number of Nobel prizes, patents, and scientific breakhroughs.  The Jewish people have been a great blessing to the whole world, and this is by God’s grace to them, based on His promises to Abraham, “I will bless those who bless you, and whoever curses you I will curse; and all peoples on earth will be blessed through you.” (Genesis 12:3).

“This is what the Lord says, he who appoints the sun to shine by day, who decrees the moon and stars to shine by night, who stirs up the sea so that its waves roar— the Lord Almighty is his name: ‘Only if these decrees vanish from my sight,’ declares the Lord, ‘will Israel ever cease being a nation before me.’  This is what the Lord says: ‘Only if the heavens above can be measured and the foundations of the earth below be searched out will I reject all the descendants of Israel because of all they have done,’ declares the Lord. (Jer. 31:35-37).  The Egyptians, Babylonians, Romans, Germans, and Arabs all failed to destroy the Israelis because God’s promises never fail.  Let America continue to stand with Israel and in submission to God Almighty.