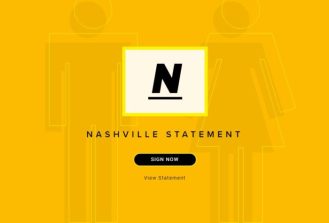 Recently certain Evangelical Leaders from the “Council on Biblical Manhood and Womanhood” released a statement on sexuality.  Called the “Nashville Statement” it affirmed the biblical teaching on marriage and sexual immorality.  It included the following positions:

1.  God has designed marriage to be a convenantal, sexual, procreative, lifelong union of one man and one women, as

husband and wife, and is meant to signify the covenant love between Christ and His bride the Church.

2.  God’s will is chastity outside of marriage and fidelity within marriage.

3.  Adopting a homosexual or transgender self-conception is inconsistent with God’s holy purposes in creation and redemption.

4.  It is sinful to approve of homosexual immorality or transgenderism and that such approval constitutes an essential departure from Christian faithfulness and witness.

What a blessing to have these men and women stand up for biblical truth in regard to marriage and sexuality.  The response from the media, liberal politicians and liberal clergy is predictably – decrying the statement as judgmental and hurtful to homosexual/transgender persons.  Certain liberal clergy adopted a position, heard more frequently these days, that even persons living an unrepentant homosexual/transgender lifestyle should be welcomed into the fellowship of believers.  Even some more conservative clergy, that agreed with the conclusions of the Statement, thought the Statement was not wise as it might tend to have the unattended effect of driving these people from the gospel.

The objectors to the Statement miss (or ignore) the point.  The persons signing this statement are not judging the homosexual/transgender lifestyle themselves but are simply articulating the clear biblical position which judges this lifestyle.  Romans 1:26-28 describes persons who were given over to depraved minds to abandon natural relations and commit homosexual acts.  I Corinthians 6:9-11 tells us that no homosexual will inherit the kingdom of God.  Genesis 5:2 tells us that God created us either male or female – we were created we do not get to choose.

The biblical position is so little heard today, even from the pulpit in many churches, that someone needs to warn homosexual/transgender persons of the wrath to come if they do not repent.  This sin is no worse than other sexual sins such as adultery (also listed in the Statement as wrong) but many homosexual/transgender persons may not have a firm realization that what they are doing is even wrong with the affirmation given by the world and even in some churches today.  It is a Christians duty to present the gospel message and let the hearer either accept or reject it.  We should not sugarcoat the message simply to keep persons in the Church but rather stand for the Truth.  The Bible notes that the Word of God will bring offense as some persons will not like to confront their sins, however we are still commanded to speak the Truth in love.

We applaud these courageous men and women for standing up against the tide and making this much-needed biblical Statement on marriage and sexuality.