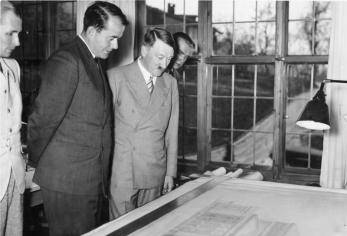 When I was in the seventh grade, around 1972, my English teacher handed out a book club flyer to encourage us to do some extra reading outside the normal reading assignments.  I was already an enthusiastic reader of books, mainly on history subjects, but rarely found any subject matter I liked in these book flyers.  However, this time I saw a new book that had just been published called, Inside The Third Reich, by Albert Speer.  I decided to order it and was engrossed in it from the start.  In fact, it is still one of the best books I have read and one of the few that I still keep a hard copy (as there is no electronic copy available).

Speer was Hitler’s favorite architect and was commissioned by Hitler to rebuild Berlin in megalomaniacal style.  Every building planned was extremely oversized and grandiose, meant to show the power and prestige of Germany after the planned conquering of Europe.  The planned Grand Dome, insisted on by Hitler, would have seated 180,000 people indoors, but was not practical.  Speer speculated that during the winter, the breathing and perspiration of more than 100,000 people inside such a large closed space might result in clouds forming and rain indoors.  Further the soft soil of the Berlin area would have had trouble supporting it.  Only a small amount of the Berlin rebuilding was actually begun before the war when it had to be stopped.  A Reich Chancellery was built but destroyed during and after the war.  Germany’s defeat in World War II insured Hitler’s plans would never be fulfilled.  As Hitler was a frustrated artist/architect himself, he grew close to Speer for a time as they would regularly review models of the new Germania (the name for the rebuilt Berlin) even up to the last few weeks of the war as the Allies closed in on Hitler’s bunker.  Speer said if Hitler had a friend, he would have been it.

During the war, after Hitler’s first armaments minister was killed in an air crash and with his building projects suspended, Speer was appointed to be the armaments minister.  He displayed a remarkable ability and greatly increased armaments production even in the midst of Allied bombing destroying much of Germany’s infrastructure.  Speer always had a natural ability at organizing people and projects.  He became very powerful and for a time was considered Hitler’s likely successor.  Later in the war, Speer lost some favor with Hitler as he tried to tell him some hard truths about Germany’s faltering war economy and other persons close to Hitler conspired against him.

At the war’s end, Speer was tried as one of the major Nazi war criminals at Nuremberg and given a 20 year sentence.  The sentence was mostly for using slave labor in his armaments work who were treated very badly with many dying of starvation and disease.  Speer used a clever defense at trial (also presented in the book) where he asserts that while he knew nothing of the Holocaust there was enough circumstantial evidence around him that he should have asked more questions and discovered it and therefore considered himself guilty of the crimes.  His recognition of guilt went a long way in sparing him the death penalty which most of the principal Nazi defendants received.  Released from prison in 1967, he published this book and later died in 1981 of natural causes.  After his death information came to light that he was lying, or in denial, and had known of the killing of the Jews although he did not directly participate.

This book was a fascinating read showing how Speer’s ambition could cause him to look the other way at much evil to gain prominence and power.  The book is also interesting in showing one of the best available portraits of Hitler, who could at times be kind, considerate, inspiring and engaging while at the same time committing great evil against the Jews and others.  Today, the only practical thing that is left in Berlin of all of the grandiose building projects of Hitler and Speer are some streetlights.  The book is a great illustration of Thomas Kempis famous saying that “man proposes but God disposes.”