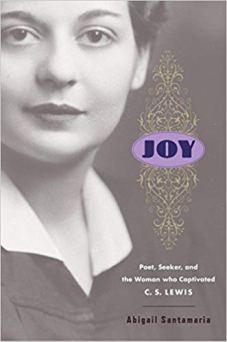 Most people have probably heard of C. S. Lewis, the famous Christian apologist writer.  The book “Joy” by Abigail Santamaria is an excellent biography of Joy Davidman, C. S. Lewis’s wife.  Based on some extraordinary new documents as well as extensive research by the author it brings a full portrait of Davidman for the first time as well as insights into C. S. Lewis himself.  A poet and radical atheistic Communist in her early years, she eventually converted to Christianity in the years before meeting Lewis, partly from reading some of his books.  She began corresponding with Lewis and fell in love with him through the letters.  At the time, Davidman was married to William Gresham and had two sons by him although their marriage was troubled due to her husband’s alcoholism and infidelities and emotional problems.

She subsequently set sail for England to meet Lewis in 1952.  A rapid friendship developed between them and Lewis became a great admirer of her intellect.  Davidman returned home in 1953 having received a letter from Gresham that he and her cousin were having an affair and that he wanted a divorce.  Davidman intended to try to save the marriage, but she agreed to a divorce after a violent encounter with Gresham.  The divorce became final in 1954 at which time Davidman returned to England with her sons.  She continued her friendship with Lewis and even influenced several of the books he wrote around this time.

In 1956, Davidman’s visitor’s visa was not renewed requiring that she return to America although she much desired to live permanently in England.  Lewis agreed to enter into a civil marriage with her to allow her to stay in England although the couple continued to live separately and not as husband and wife.  Later in the year, Davidman was diagnosed with incurable bone cancer.  It was at this time that Lewis recognized that he had fallen in love with her.  In March 1957 the doctors gave her only a short time to live due to the aggressive nature of her cancer.  Lewis and Davidman had a Christian marriage performed in the hospital room and became truly husband and wife although it appeared it would only be for a short time.  However, Father Peter Bide, who had a recognized spiritual gift of healing, came to pray over Davidman for healing.  To the amazement of the doctors her cancer almost immediately went into remission and she was in reasonable good health for the next three years which allowed her and Lewis to enjoy a short span of blissful happiness in each other’s love.  The cancer eventually returned and took her life in 1960 but Lewis’s life had been forever changed.  A bachelor into his 50’s God had allowed him to experience romantic love for the first time.

I highly recommend this book for a view of a very intelligent women, a writer herself, who could go head to head with Lewis intellectually, which was no small feat.  She was very brash and sometimes difficult, the opposite of C. S. Lewis in so many ways, but was the love of his life.