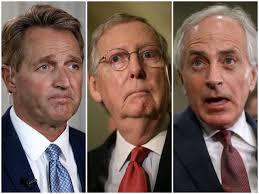 The Whig Party had been very successful but one huge issue resulted in its rapid demise.  Moreover, it tried to play the middle on a major issue, but alienated its members.  With its demise a new party, the Republican party, arose by reaching out to those who were ignored and betrayed by their former party.  In just a few years the Whig party was defunct.  History demonstrates that political fortunes can change rapidly.  Even though slavery was a block buster issue during the last years of the Whig party, it does not necessarily mean that one major overriding issue must be present to spawn drastic change in politics.

Today, we have three parties, Conservative, Democrat, and Republican Establishment/Never Trumpers.  Political momentum works for a two-party system and opposes all others.  The Republican establishment has become irrelevant by siding with and acquiescing to Democrats over many years, offering two loser candidates, failing to listen to their party members, and cowering before democrat/media.  The election of Trump collapsed the facade of the party leaving the establishment members exposed, realigning a majority of the electorate against the two major parties.  President Trump confronted the Democrat Party/media and consolidated his loyal conservative, independent, and libertarian base of support.

Rather than one major issue there are several distinct issues but they are linked by a common theme, creeping socialism. Since 1990, Democrats have consistently expanded government social programs, most notably and recently – Obamacare. Over the same period there has been a tremendous increase in the population of illegal immigrants with related social assistance and legal accommodation such that certain cities/states are refusing to comply with federal immigration laws, designating themselves “Sanctuary” cities.  The Democrats no longer represent the interest of American citizens and seek to reform America into a socialist quagmire without borders while the Establishment stands by bewildered.  Finally, social issues such as bathroom access laws and redefining marriage under the Obama administration are linked to the social engineering of socialism.

The Republican party since 1990 until 2016 was controlled by “establishment” members who campaigned against socialism but where unwilling to actually oppose the Democrats.  A significant majority of people who had supported Republicans felt betrayed and disenfranchised by the Establishment.  Over forty Establishment representatives retired in 2018, allowing the Democrats to take control of the House and hamper President Trump’s efforts to build up the country.  However, another factor is critical to the rise of conservatism and the fall of Establishment Republicans – truth and credibility.  The shameful abandonment of factual unbiased reporting by major media organizations over the last thirty years has reached the tipping point and they have lost all independence and most of their credibility.  The insincerity and dishonesty of the Establishment Republicans has had a similar impact such that the electorate is looking for a party that will speak, act, and honor the truth.

Whether the Republican party survives under different management or whether a Tea party or other New party emerges to replace it is hard to say but the Establishment may be breathing its last gasps.  They seem to be looking for their old friend the Democrats to step up and save them but that would be quite out of character.  Perhaps it is fitting that a party born by acting on its members desires should expire as did the one it replaced for failing to do so.