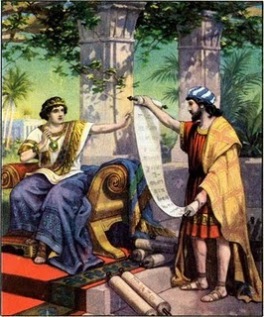 America today is arguably a post-christian society with unrestricted abortion, homosexual marriage, rules requiring a person to address another person as whatever gender they deem themselves regardless of their biology and traditional christian values of all kinds under attack.  Even in many churches there is more concern about illegal aliens or other perceived “social injustices” than individual salvation and personal holiness.  Churches are increasingly reluctant to preach against sin to avoid losing members or to get approval from the world.  The Church desperately needs to rediscover the Word of God as Israel did back in the day of King Josiah as described in II Kings 22.

When the king heard the words of the Book of the Law, he tore his robes.  He gave these orders to Hilkiah the priest, Ahikam son of Shaphan, Akbor son of Micaiah, Shaphan the secretary and Asaiah the king’s attendant: ‘Go and inquire of the Lord for me and for the people and for all Judah about what is written in this book that has been found.  Great is the Lord’s anger that burns against us because those who have gone before us have not obeyed the words of this book; they have not acted in accordance with all that is written there concerning us.’

Hilkiah the priest, Ahikam, Akbor, Shaphan and Asaiah went to speak to the prophet Huldah, who was the wife of Shallum son of Tikvah, the son of Harhas, keeper of the wardrobe.  She lived in Jerusalem, in the New Quarter.

She said to them, ‘This is what the Lord, the God of Israel, says: Tell the man who sent you to me, This is what the Lord says: I am going to bring disaster on this place and its people, according to everything written in the book the king of Judah has read.  Because they have forsaken me and burned incense to other gods and aroused my anger by all the idols their hands have made, my anger will burn against this place and will not be quenched.’  Tell the king of Judah, who sent you to inquire of the Lord, ‘This is what the Lord, the God of Israel, says concerning the words you heard: Because your heart was responsive and you humbled yourself before the Lord when you heard what I have spoken against this place and its people—that they would become a curse and be laid waste—and because you tore your robes and wept in my presence, I also have heard you, declares the Lord.  Therefore I will gather you to your ancestors, and you will be buried in peace.  Your eyes will not see all the disaster I am going to bring on this place.’”

Josiah went on to read the rediscovered Word of God to the people and made a covenant before the Lord, to walk after the Lord, and to keep His commandments and the people agreed with the King to this for themselves.  The King proceeded to destroy the idols that had been set up to false gods and put away the priests and others who had been working with them.  The passage reports that there was no king before or after him, that turned to the Lord with all his heart.  However, II Kings 23:26 sadly reports “Notwithstanding the Lord turned not from the fierceness of his great wrath, wherewith his anger was kindled against Judah, because of all the provocations that Manasseh had provoked him withal.”

Perhaps it is already too late for America, perhaps not, but the Church needs to rediscover the Word of God and bring the unadulterated Word back to America to perhaps foment repentance and delay the sure judgement that will come against our great national sins.