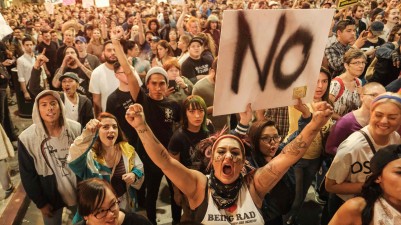 The current rhetoric of the fascist humanist media and their spokespersons spew a constant stream of complaints against:

▪Equal treatment under the Law,

▪Other individuals and organizations who oppose Fascist-humanism.

These people complain because they consider themselves the rightful arbiters of justice and therefore they want to deal out punishment to some and restitution to others as they choose.  The best illustration may be in their concept of “Distribution of wealth”.  Human history has left the ultimate distribution of wealth and all other judgments to those who are in authority.  This authority has often been obtained through conquest and war.  The American Revolution, through a war with England, established structures under a constitution to define government authority as derived under God, by the people and for the people, with liberty and justice for all.  The founding documents place limits on government and provide the Judeo-Christian principle that wealth accrues to those who work or produce it, rather than, as distributed by Kings, Dictators, Socialist/Communist government or Fascists-humanists.

The American Fascist-humanist understand that authority must be taken from those who possess it and have initiated, Silent coup, Media war, Judicial lawfare, Deep-state and Climate crisis actions to take over total authority, absolve the rule of law, destroy the founding documents and remove Representative Republic Government in America.  Once their goals are reached all their complaints will be effected against the partial list shown above.  It may be that their conquest will eventually involve physical battles in the streets with actual weapons of war, as seen in history.  It is unlikely that these Fascists will just concede when fully exposed or if a few of their illegal perpetrators are prosecuted.  Communists to this day still seek to overthrow America from within, but they are contained by the truth.  Is it time to prosecute liars in control of the fascist media who are reckless, malicious, slanderous and libelous with purposeful intent.  I do not believe existing law allows, even large corporations, to attack, slander, libel, spread known lies and falsehood, with destructive intent in an obvious and planned goal of destroying any individual.  If so, the law must be clarified.  Additionally, a law may be needed to specify that all those who advocate against the right to bear arms may not bear one, so as to disarm the fascists and ensure that their attempted revolution is with words alone.  I know this part is impossible as fascist are liars by definition and seek to take arms and wealth from their opponents, rather than themselves.