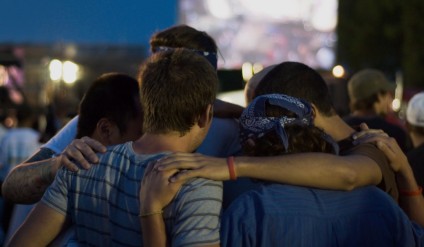 Religion can be defined as a cultural system of designated behaviors and practices, morals, worldviews, texts, sanctified places, prophecies, ethics, or organizations, that relates humanity to supernatural, transcendental, or spiritual elements.  A common meaning sees it as mankind’s effort to relate with God.  Faith is trust, assurance and confidence in God, that what He communicates is true and His promises certain.  The Bible definition is, “Faith is the substance of things hoped for, the evidence of things not seen” (Hebrews 11: 1).

Someone said, “Faith without doubt leads to moral arrogance, the eternal pratfall of the religiously convinced.”  No, doubt is not a virtue, only the godless would think so.  However, I do believe that religion can divide us and offend others.  The religious Pharisees took offense at the Son of God their Messiah, Yeshua.  During the Jesus movement many new believers embraced unity among Believers by focusing on the fundamental tenets of christianity.  These include those contained in the Bible and summarized in the Apostle’s Creed, (see below).  The Bible supports deference to differing individual expressions of faith, such as diets, observed holidays, etc. and we are admonished to be gracious and non-judgmental. (Rom. 14: 4-6).

I have a friend that ridicules charismatic gifting, but his belief that a kosher diet and observing Jewish feasts makes one more pleasing to God is equally ridiculous to me.  I believe this illustrates the difference in religion and faith.  While we may not agree on religious practices, we can find unity in faith that is centered in the Almighty Father God, the Son, Lord Yeshua, and the Holy Spirit; in the love, sovereignty, mercy, hope, and every aspect of the one true God, Creator of the universe from whom we have received new birth and were made children of God, joint heirs of Salvation.

I believe in God, the Father almighty, creator of heaven and earth.

I believe in Jesus Christ, God’s only Son, our Lord,

who was conceived by the Holy Spirit,

born of the Virgin Mary,

was crucified, died, and was buried;

he descended to the dead.

On the third day he rose again;

he ascended into heaven,

he is seated at the right hand of the Father,

and he will come to judge the living and the dead.

I believe in the Holy Spirit,

the communion of saints,

the forgiveness of sins,

the resurrection of the body,

and the life everlasting.  Amen.

I have another friend who has some different views than I, but we have shared our mutual adoration and gratitude toward our Sovereign God.  We have shared the presence of Holy Spirit in prayer and endured persecution together with God’s peace.  In that faith there is great unity.  In the last days, (whether of the world or us individually) there will be times of great trial, it will be faith tested by fire that prevails.  We have so many faults, weaknesses and failures, among these there is room for our differences without the need to abandon fellowship.  “In your relationships with one another, have the same mindset as Christ Jesus: Who, being in very nature God, did not consider equality with God something to be used to his own advantage; rather, he made himself nothing by taking the very nature of a servant, being made in human likeness. And being found in appearance as a man, he humbled himself by becoming obedient to death—even death on a cross! (Phil. 2: 5-8).