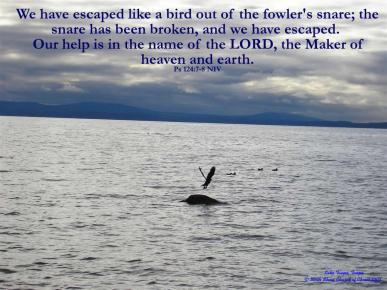 If you had only one set of clothes you might be better off than other men.  If you had a complete set of underwear, you certainly would be greatly advantaged to those who are barely able to cover their nakedness, but your clothes would become dirty, tattered, and worn by constant use, so that in a short time you would be in rags.  It’s just an illustration of the humility we should all embrace.  True humility is unseen and not demonstrated by any willful act.  It can not exist where pride rules.  So much of all we perceive is a figment of our imagination.  The physical elements are real, but our mind and senses fashion a fantasy to fit the suggestion this world gives us.  Just like fish in a bowl, we are captives in our own mind.

The really hard truth is that sin is real.  It does not simply evaporate like water; it does not biodegrade in the elements; it is not dissolved by water like smooth stones in a stream bed.  “The sins of some are obvious, reaching the place of judgment ahead of them; the sins of others trail behind them.” (1 Timothy 5: 24).  Lest you doubt, remember back when you were young and the hurt you felt by an act of injustice, another’s sin against you.  Though you have buried these memories along with the countless acts of your own injustice toward others, they remain.  Sin is written in permanent ink, so indelible that Adam’s sin carried down to his son’s and daughters all the way to you and I.  It is our nature to sin and rebel and every human is a sinner.

The world fantasy deny’s it, even though every religion recognizes it and offers their remedy.  Most people offer no remedy at all, but rather, suggest a most rare chance of reward or peaceful nothingness. The relatively new Humanist religion makes man God, therefore, all sin is good.  For example, it is good to kill babies, even as they are birthed.  Also, as there is no truth, lies are good.  Humanism has already perpetuated more evil and death through its Communist, Nazi, and Fascists leaders than any other idea.

Religion is man’s effort to eliminate sin and satisfy God. Christianity falls outside that definition, because it is predicated on acts of the Messiah, Yeshua, God’s one and only son, who paid the penalty of sin for all who believe upon Him. Believers are made holy, given righteousness, and adopted into God’s family.  They know the way, the truth, and the life and may approach Father God through His indwelling Holy Spirit.  Sin’s captive hold has been broken, “We have escaped like a bird from the fowler’s snare; the snare has been broken, and we have escaped.” (Psalm 124: 7).

First, read the Bible.  I suggest you start with the gospel of John.  Listen to Yeshua’s word to you, “Here I am! I stand at the door and knock.  If anyone hears my voice and opens the door, I will come in and eat with that person, and they with me.” (Revelation 3: 20).  The door is your heart, your innermost being, where are your secrets, longings, your true self, broken and needy.  Let Yeshua in, He says, “Come to me, all you who are weary and burdened, and I will give you rest. Take my yoke upon you and learn from me, for I am gentle and humble in heart, and you will find rest for your souls.”  (Matthew 11: 28-29).