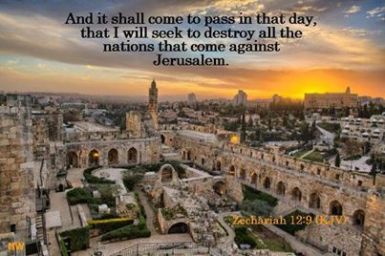 Israel was destroyed in 70 AD, by the Romans, shorty after the Messiah Yeshua was killed, raised to life and ascended to heaven.  In 1947 the Israeli nation was reestablished.  In 1967, Jerusalem the capital of Israel was liberated from foreign captivity and rule.  In 2018, Jerusalem was designated the capital of Israel by the USA, followed by other free nations. How much longer will there be until the Messiah Returns and the Jewish people accept their Messiah?  Israel’s return as a nation in the land is a beacon of Yeshua’s soon return.  Yes, the revived Roman empire from the land of Europe, will renew its hostility against the Israeli nation.  World systems influenced by the enemy are forever opposed to the children of God.

The return of the Israeli nation, with its own language after about two thousand years is a sign bright in the dark sky that Yeshua’s return will be soon.  All nations at that time will align themselves against Israel, but just as Israel was restored through God’s supernatural hand, so will be their deliverance and victory over her enemies.  Israel’s Messiah will come back to establish His Kingdom on earth.  “On that day, when all the nations of the earth are gathered against her, I will make Jerusalem an immovable rock for all the nations.  All who try to move it will injure themselves.  On that day I will set out to destroy all the nations that attack Jerusalem.  “And I will pour out on the house of David and the inhabitants of Jerusalem a spirit of grace and supplication.  They will look on me, the one they have pierced, and they will mourn for him as one mourns for an only child, and grieve bitterly for him as one grieves for a firstborn son.  On that day the weeping in Jerusalem will be as great as the weeping of Hadad Rimmon in the plain of Megiddo.  The land will mourn, each clan by itself, with their wives by themselves: the clan of the house of David and their wives, the clan of the house of Nathan and their wives, the clan of the house of Levi and their wives, the clan of Shimei and their wives, and all the rest of the clans and their wives.” (Zechariah 12: 3, 9-14).

The turning of believers hearts to Israel is the work of Holy Spirit.  The charismatic renewal of the Chuch has been accompanied by an outpouring of Yeshua’s love for Abrahams descendants.  Messianic Jews have multiplied and are becoming accepted in Israel as Jews who believe in Yeshua.  The state of Israel has no greater friend than the evangelical church.  The last days are drawing near, wickedness is rising, just as God’s children are unifying under Yeshua’s banner of love.  Unity among God’s children is on the horizon, but will not be complete until all Israel is saved and accepts her Messiah and Savior.  Her mourning will be turned to joy, by the deeds of Yeshua Messiah.