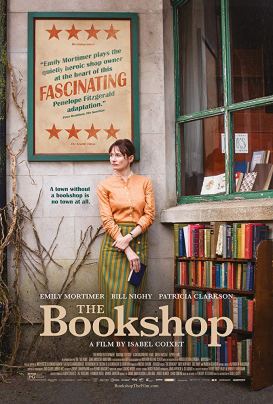 This movie stars Emily Mortimer, Bill Nighy, and Patricia Clarkson.  It is set in 1959, in a quaint seaside location near London and is a story about a persons dream and courage in the face of adversity.  Bill Nighy is one of my favorite actors and doesn’t disappoint in this film.  It is rather slow compared with all the action films we see today in America, but it has two elements I think are necessary for any good film, an interesting scenic setting and a good story with an ending that makes sense.  With these two factors well done a film has a good chance of being worth ones time to watch.  IMDB rates it 6.5 which I think is a little low, but probably due to the slowness with which the film develops.  However, the book upon which it is based has a slow unfolding purpose that is part of its genre.

What I liked was it’s portrayal of courage.  We seldom hear much about courage in our society and in truth it has fallen out of favor with the politically correct crowd.  Bruce Jenner was called courageous for being mentally ill.  To be courageous one must have a purpose and conviction.  A crowd can not exhibit courage, certainly not a mob, since they are not standing for something, but rather are seeking to forcefully obtain it through intimidation and militancy.  Courage is the essence of this movie which I liked and the story is quite plausible.  I thought the acting was good and particularly the children who were involved in the story.  It is unusual to have children involved in a story about adults where they are not simply part of a family.

I have always been fascinated with courage.  The movie Patton was about courage and destiny and it is one of my favorites.  In my career it was necessary, I concluded, to confront powerful entities represented by highly successful influential attorneys.  It took courage of sorts and I often found myself encouraging and seeking to persuade others to join me in a right cause.  At least once a year I would think to myself, “This may be the end, I may encounter someone who will have me removed for the work I’m doing.”  Was it courage or that I was simply willing to loose my position, rather than look the other way and sanction what I knew to be wrong.  We had a meeting in Washington with some of the highest agency executives in the nation.  I met privately impromptu with the Division head in order to secure his support, but I could see his main concerns were political, although he knew our position was right.  I considered this cowardice at the time, but who was I to judge this man.  We lost our issue in a farcical parody of justice, but courage is often best illustrated in loss.

If your expectations are not too high and you can appreciate a simple movie about ordinary people and real life concerns, you might like this film.  If you want to be dazzled look elsewhere.