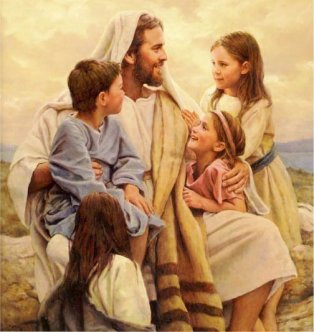 Throughout human history there has been only one perfect man.  Many have made claims of greatness and some to divinity, like the Caesar, but they have all died.  Herod whipped up his audience so much that they began to shout that he was divine, but scripture tells us that he relished the thought and immediately was eaten by worms and died. (Acts 12: 21-23).  Men do not need to claim divinity if they may be worshipped as such, and we see this all across the world and even in the church.  Not only do people seek the praise of men, they are apt to give and exalt men beyond all reason.  To this day various Jewish Rabbi’s have been designated by their followers as the Messiah.  Of course, there is no end to the number of small occult groups that worship their leader and proclaim him or her more that human.  The Jonestown massacre resulted from such a group.  Satan is the greatest imposter who decided to make himself like God.  “You said in your heart, “I will ascend to the heavens; I will raise my throne above the stars of God; I will sit enthroned on the mount of assembly, on the utmost heights of Mount Zaphon.  I will ascend above the tops of the clouds; I will make myself like the Most High.” (Isaiah 14: 13-14).

The scriptures foretell the coming of the Messiah, the God-Man, who would save a people for God.  His coming to earth, words, deeds, death, resurrection and departure from earth were prophesied and recorded in great detail.  The books comprising the Bible have endured thousands of years as no other record has and the accuracy preserved accordingly. The dead Sea scrolls discovered in 1949, attest to astounding exactitude of the text of Isaiah.  Over three hundred precise prophecies about Yeshua Messiah were fulfilled in specific detail.  The Bible has been subjected to more testing and examination by means of archeology, history, and scientific verification than any other book.  It still stands alone and unrefuted as the most read and verified book of all time.  Recently, I read a critique and denial of the scriptures veracity.  Many claims were made, but as proof the author sited that Matthew was based on Mark and therefore, unreliable. Apparently, only frivolous arguments remain as options to debunk the Bible.

The prophecies regarding Yeshua’s return to earth are not yet fulfilled, as He will return in the last days.  When He ascended into heaven two angels appeared to those who witnessed it saying,  ” ‘Men of Galilee,’ they said, ‘why do you stand here looking into the sky?  This same Jesus, who has been taken from you into heaven, will come back in the same way you have seen him go into heaven.’ ” (Acts 1: 11).  When He returns He will come as a lion and victor to deliver Israel from certain annihilation.  He will rule with a firm hand, humbling and destroying those who attack Him.  All Israel will be saved and “On that day I will set out to destroy all the nations that attack Jerusalem.  And I will pour out on the house of David and the inhabitants of Jerusalem a spirit of grace and supplication.  They will look on me, the one they have pierced, and they will mourn for him as one mourns for an only child, and grieve bitterly for him as one grieves for a firstborn son.” (Zechariah 12: 9-10).

It was God’s purpose in the beginning to be united with mankind through His only son, Yeshua, who is fully God and fully Man.

“In the beginning was the Word, and the Word was with God, and the Word was God.  He was with God in the beginning. Through him all things were made; without him nothing was made that has been made.  In him was life, and that life was the light of all mankind….The Word became flesh and made his dwelling among us.  We have seen his glory, the glory of the one and only Son, who came from the Father, full of grace and truth.” (John 1: 1-4, 14).  Every corrupted inclination of mankind will be put right, and is being done so now in God’s family.  For example, idolatry will be replaced with worship of the one true God; influence of controlling evil spirits will be replaced by the leading of the indwelling Holy Spirit; physical acts of stealing, killing, and war will be replaced by acts of service, kindness, and love; self-centered acts of greed, slavery, and materialism will be replaced with selflessness, giving, and helping.  Before all this is accomplished, a false antichrist will be revealed to lead astray the wicked.  He will promise seemingly good things like peace, prosperity, and unity among men, but it will be a great deception of the enemy.  He will claim to be God and perform amazing signs, and he will appear to have received a mortal wound and yet survived.  He will be a false messiah.  He will be destroyed by Yeshua’s upon His return.  We see some of the deception of which the antichrist will build upon today in a lying media, fake impending crisis, calls for one world government, one world monetary system, and secular humanism.  Nevertheless, we put our hope and faith in Yeshua Messiah who will never abandon His people and will triumph over the enemy.