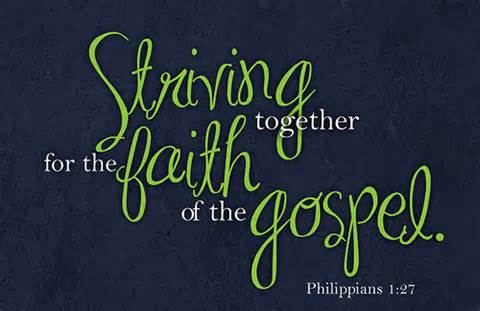 “Only let your manner of life be worthy of the gospel of Christ, so that whether I come and see you or am absent, I may hear of you that you are standing firm in one spirit, with one mind striving side by side for the faith of the gospel,  and not frightened in anything by your opponents. This is a clear sign to them of their destruction, but of your salvation, and that from God. For it has been granted to you that for the sake of Christ you should not only believe in him but also suffer for his sake, engaged in the same conflict that you saw I had and now hear that I still have.” Phil 1:27-30.

This passage reminds us as Christians to always live our life worthy of the gospel of Christ to which we are called; standing firm for the gospel and not frighted by our opponents. The phrase “let your manner of life be worthy” is just one word in the Greek text literally meaning “to live as a citizen.” We are citizens of heaven, living temporarily in this world, and should always carry ourselves as such. The greek for “stand firm” conveys the idea of refusing to leave a post irrespective of how severely the battle rages around us.

We live in a wicked country in a wicked world that has increasing contempt for Christians. These people hate us because, even though God has given everyone sufficient evidences of Himself (Romans 1:20-21), they have refused to accept Him as God and when we stand fast in the faith we give them a clear sign of their coming destruction. The word “frightened” in this passage is extremely rare, found nowhere else in the entire Greek Bible. It is used in the greek to speak of timid horses that shy upon being startled at some unexpected object. We are not to be intimidated and run away when persecution comes but stand firm against the wicked, which will be a sign of our coming victory in Christ.

It has been granted to us to suffer for His sake. This is a privilege, although it may not seem so while we are suffering, and is the same battle that Paul had with his adversaries throughout his ministry. In Tom Constable’s Expository Notes on the Bible he put it this way “In calling his readers to unite in steadfastly enduring the antagonism of unbelievers in their area, Paul was not asking them to do something he himself had not done. He was urging them to unite with one another, and with him, and to view suffering for their faith as a privilege that would glorify Jesus Christ. This exhortation is necessary today when we feel tempted to agree with unbelievers rather than taking a firm stand for our Lord.”

Stand firm together against the wicked mighty men and women of valor because the Lord is with you! (Judges 6:12)

No News is Good News

Yesterday, I saw a snake on my path, it was clearly non-poisonous, but it wiggled it’s tail like a rattlesnake, which caught my eye. I paused and watched it, when something dropped from its mouth. It quickly turned away from me and left in the other direction. Crawling toward me was a lizard missing its […]

When we come together in the Spirit, entering into the Lord’s presence we are changed. There is no one who cannot be changed and that within a group dynamic of the Spirit’s leadership. God is supernatural, Sovereign over everything including appointments, gatherings, situations, human hearts and minds on any scale and plane. For a poor […]