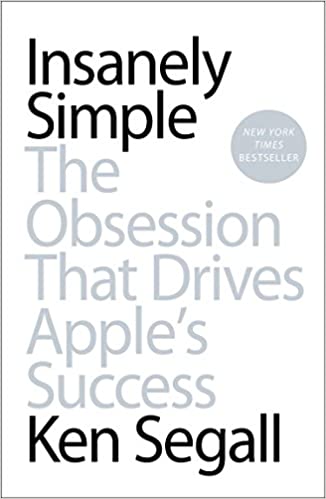 Insanely Simple is a book written by Ken Segall on the obsessive simplicity of Apple Corporation. It makes the case that one of the keys of Apple’s success is its drive to simplify its products and processes and not let complexity creep in. This was a principle Steve Jobs believed in strongly and insisted his company’s employees approach product development and marketing that way. Segall worked closely with Jobs in its marketing and advertising campaigns and that is the primary focus of the book. Segall worked with both Apple and Dell during his career and does much comparison in their approaches, unfavorably contrasting Dell to Apple. Segal showed that while mosts large companies focus on analysis, tests, focus groups, revenues, etc. in developing their products/marketing, Apple takes a more simple approach, not even running an advertising campaign past a focus/test group before issuing it. They rely on their own good judgement and although sometimes they miss, they are recognized as having some of the most effective advertising ever for a company and some of the greatest products ever developed. Apple tries to create an “insanely” great product and great customer experience first and knows the profits will follow. This has allowed Apple today to become one of the most valuable brands and companies in the world.

It is not enough to just produce a quality product but it is also necessary to make it as simple for the customer as possible. When things got too complicated Jobs used to beat it with the “simplicity stick”. The same principles applied to advertising where, instead of listing endless specifications of how its product was better than others, Apple went for a short tagline that captured the purpose of the product perfectly. Ad campaigns featuring “Think Different” for the revolutionary iMac and other products were some of the most effective ever developed. This ad had only these words with a video of several inventors/activists/sports figures that had changed the world. Jobs also hated bureaucratic processes seen in large corporations. He always preferred small groups with intelligent people to work together to solve problems. As only Jobs had to give approval, and not every head of a division as in other large companies, this prevented good ideas from being lost in the bureaucracy. He believed it was fine to make an occasional mistake when you were “shooting for the stars”. Admit your mistakes and move on quickly and do not let bureaucracy slow you down or kill a good ideal altogether.

Jobs also put limited faith in product statistics and analytics of customer feedback. He would review the data but would concentrate on producing a product that he and his team thought would be something that would “wow” a customer and the sales would follow. He quoted Henry Ford of Ford Motor, who once said as he was developing the first car, that if he asked a customer what they wanted they would say a faster horse. Ford instead would give them something not evolutionary but revolutionary and Apple strived to do the same thing.

“Steve’s greatest achievement wasn’t a Mac, iPod, iPhone, or iPad,” writes the author. “He accomplished something that no one had even contemplated before. Steve Jobs built a monument to Simplicity.” I recommend this book as an excellent tutor on the wise business practice of promoting simplicity and eschewing bureaucracy. Further, anyone with an interest in Steve Jobs, Apple or the advertising industry will find much to enjoy in this book.