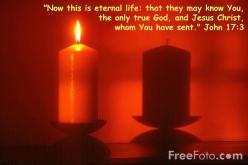 Eternal life…..movies and books have fantasized about its attainment, Cortez searched the new world for “The fountain of youth”.  People are seeking to live longer lives and life expectations for populations are increasing.However, who can deliver on such a promise.

God alone promises eternal life… and it only in His one and only Son, Yeshua.  All through the New Testament scripture is the promise of eternal life.  No other religion makes such an offer.  Islam has a very limited circumstance for male killers who kill infidels, (non-believers), in jihad.  Hindus and Buddhists have hopes of reaching a happy state in the afterlife, but it is not described as life eternal or depicted to be equivalent to life, but more a state of non-living tranquility.

Some would say Christianity places the highest limitations and requirements on attaining eternal life, and I agree, if one is seeking in themselves to attain eternal life – you must live a perfect life in all respects, without one failure, but what does scripture say.

Titus: 1: 2. in the hope of eternal life, which God, who does not lie, promised before the beginning of time,….

Luke: 18: 18, 24-27. A certain ruler asked him, “Good teacher, what must I do to inherit eternal life?” …..Jesus looked at him and said, “How hard it is for the rich to enter the kingdom of God!  Indeed, it is easier for a camel to go through the eye of a needle than for someone who is rich to enter the kingdom of God.”  Those who heard this asked, “Who then can be saved?”  Jesus replied, “What is impossible with man is possible with God.”

John: 3: 35-36. The Father loves the Son and has placed everything in his hands. Whoever believes in the Son has eternal life, but whoever rejects the Son will not see life, for God’s wrath remains on them.

Summarizing, faith, believing God is the requirement, but even this must proceed from God who opens the eyes of unbelievers so that we can believe.

2 Corinthians: 4: 4. The god of this age has blinded the minds of unbelievers, so that they cannot see the light of the gospel that displays the glory of Christ, who is the image of God.

Yeshua, Jesus’ Hebrew name, is the hope and answer for all mankind, turn to Him, seek Him with all your heart, mind, soul, and strength.  He is near and knocking on the door of your heart, open to Him in submission and surrender, and receive all that He is.

… “My soul glorifies the Lord and my spirit rejoices in God my Savior, for he has been mindful of the humble state of his servant.  From now on all generations will call me blessed, for the Mighty One has done great things for me— holy is his name.  His mercy extends to those who fear him, from generation to generation.  He has performed mighty deeds with his arm; he has scattered those who are proud in their inmost thoughts.  He has brought down rulers from their thrones but has lifted up the humble.  He has filled the hungry with good things but has sent the rich away empty.  He has helped his servant Israel, remembering to be merciful to Abraham and his descendants forever, just as he promised our ancestors.” Luke: 1:46-55