Home › Theology › What Happened to the Sacrifice

What Happened to the Sacrifice 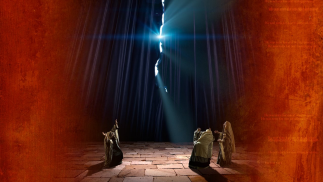 The sacrifice in the Torah has been fulfilled by a lasting, once for all sacrifice of the Lamb of God, His one and only son Yeshua, Messiah.  That sacrifice was the one to which all the rituals of Passover pointed. So, when the curtain in the temple was rent from top to bottom, as the spotless lamb of God died on the cross, the Holy place was opened, providing access to God, through Yeshua.  The temple was destroyed in 70 AD.; the sacrifice ceased at that time as well.

However, there is another scripture…that sheds light on the end of the sacrifice and what is yet to come.

“The Lord said to me, ‘Go, show your love to your wife again, though she is loved by another man and is an adulteress.  Love her as the Lord loves the Israelites, though they turn to other gods and love the sacred raisin cakes.’  So I bought her for fifteen shekels of silver and about a homer and a lethek of barley.  Then I told her, ‘You are to live with me many days; you must not be a prostitute or be intimate with any man, and I will behave the same way toward you.’ For the Israelites will live many days without king or prince, without sacrifice or sacred stones, without ephod or household gods.” (Hosea 3:1-4).

God instructed Hosea to symbolize what God and His people Israel were acting out through their respective affections.  Hosea’s adulterous wife was to abstain from any relations with other men; Israel was to live many days without sacrifice or sacred stones.  Here we see that God stopped the sacrifice, the connections of Israel’s affections to religious observances and human authorities.

The blessing comes thereafter, “Afterwards the Israelites will return and seek the Lord their God and David their King.  They will come trembling to the Lord and to his blessings in the last days.” (Hosea 3:5).

God’s word brings insight and truth about what is yet to happen.  God knows the beginning from the end, and He shows His power, greatness, and hope for us through prophecy.  What a wonderful encouragement God gives, showing that Israel will return to their God and Lord Yeshua, David their King.  We can look forward with delight to the return of Israel to their God and Messiah.  What great joy will fill the Church as Israel unites with the nations of God’s people who have been grafted into spiritual Israel. (Rom. 9:6-8).  Perhaps it will be the epilogue to the story of the prodigal son. (Luke 15:11-32).         The older brother will return to the younger brother in great forgiveness, acceptance, joy and unity – together they will share in the Father’s love, as one family reunited.