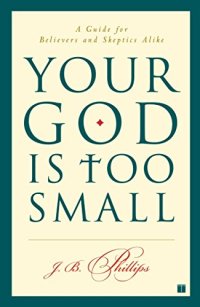 “Your God Is Too Small” is a book by J.B. Phillips.  My comments about the book will be in two parts, this being part 1, Destructive.  Phillips first debunks artificial concepts of God, thus using destructive as the negative focus indicates. Among his unreal God’s are the following:

Assorted; God in a Hurry, God for the Elite, God of Bethel, God without Godhead, Gods by any Other Name

Most of these are self descriptive, but even so, Phillips adds much to each title to articulate the deficiency of each unreal god.  He is an excellent writer and even though this first half of the book is negative, I found it very instructive.  I did have a few objections and that may indicate some failings in my own conception of God, which he admits that as limited humans we can not fully comprehend the entirety of an infinite God.  Particularly, he gives the “Mild” term quite a beating, which bothered me in that I see Yeshua as quite mild in his conduct with certain people, for example, the woman caught in adultery and Peter when he is restored after the resurrection, and others who might be worthy of a more harsh rebuke.  Also, I chafed at his critique of God as the Heavenly Bosom, which he describes as a place of escape from the realities of the world and a God of escape is a very small God. However, to simply view an aspect of God’s love through a loving embrace, as a response to the message of Yeshua, is certainly supported in my reading of scripture.

I did find Phillips’s identification of so many unreal god’s to be enlightening for Christians, but some where obviously totally unrelated to scripture, and it is not written with a solely Christian perspective.  I think I have met people who have a Perennial Grievance god.  These are people who believe they have been wronged by god, or were treated unfairly by god, thus they never go beyond their grievance, which may be some horrible event that they believe no just or loving God could or should have ever allowed to happen, especially to them, as they were undeserving of such a harsh circumstance.  I am well acquainted with the Absolute Perfection god which describes a legalistic God waiting to whack everyone.  The author distinguishes the absolute perfection of God himself and focuses on Jesus’ statement to be perfect as God is perfect.  He allows that God knows each of us and the process of sanctification in this life is a continual progression toward perfection.  Finally, I thought the Assorted God’s were well identified, as there are many worldly people who make government their god, even without admitting it, but they give to government the trust and admiration that belongs to a real God. The God of Bethel is a God for those who prefer the Old Testament God Jehovah and have problems accepting that Messiah Yeshua is fully God.  I believe it is helpful to identify any way we have placed limits on our conception of God and to constantly hold fast to God’s revelation of Himself in scripture. “Your God is Too Small” Part 2 will be coming soon.