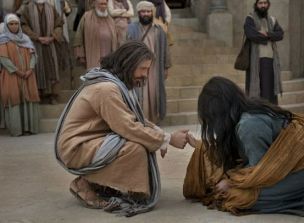 “The Pharisees  made her stand before the group and said to Jesus, ‘Teacher, this woman was caught in the act of adultery.  In the Law Moses commanded us to stone such women. Now what do you say?’  They were using this question as a trap, in order to have a basis for accusing him.  But Jesus bent down and started to write on the ground with his finger. When they kept on questioning him….”

We are told that this was a trap for Yeshua, if he failed to condemn her, they could rightly accuse Him.  He did not offer a politicians response; trying to appeal or placate both groups present.  He did not offer a lawyers response; that the law actually required both the man and woman to be stoned, (Lev. 20:10).  He did not offer a judges response; seeking to weigh and establish all relevant facts and intents.  He paused allowing the accusers to continue their rant, then responded with the truth — that all people stand before Him as this woman.

“…he straightened up and said to them, ‘Let any one of you who is without sin be the first to throw a stone at her.’  Again he stooped down and wrote on the ground….”

I believe we all can identify with the woman in this situation; standing guilty, caught, exposed, without defense, accused and condemned, having given in to selfishness, and subject to a pending wrath.  All sin is equally offensive to God and he who breaks one command has broken them all. (James 2:10).

“At this, those who heard began to go away one at a time, the older ones first, until only Jesus was left, with the woman still standing there.”

The sense of quilt is heavy, but the recognition of emptiness and worthlessness can be overwhelming.  When we come to the end of ourselves, we see Yeshua.

“Jesus straightened up and asked her, ‘Woman, where are they?  Has no one condemned you?’  ‘No one, sir,’ she said.  ‘Then neither do I condemn you,’ Jesus declared.  ‘Go now and leave your life of sin.'”

At the place of brokenness and supreme need, we will often find Yeshua reaching out speaking freedom, healing, restoration and redemption.  What we will sense and know in our inner-most being is the love of God.  This is the amazing grace that truly is God’s unlimited unconditional love given to a wretch like me.

One thought on “One Caught in Adultery”