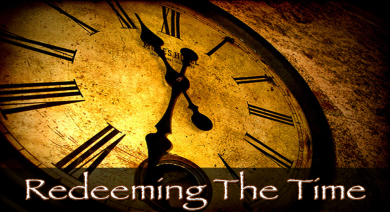 Ephesians 5: 15-16 states “Be very careful, then, how you live—not as unwise but as wise, making the most of every opportunity, because the days are evil.” (NIV).  The KJV says, “See, then, how exactly ye walk, not as unwise, but as wise, redeeming the time, because the days are evil;” (KJV).  Many versions keep the phrase “Redeeming the time”. (ASV, WEB, YLT).  Redemption is buying back what was lost.  In the Torah many things were to be redeemed, including a firstborn son and firstborn donkey.  Property sold was to be redeemed by a relative.  God redeemed Israel out of slavery to be His own people.  In the new covenant, we learn that “Christ redeemed us from the curse of the law by becoming a curse for us, for it is written: ‘Cursed is everyone who is hung on a pole.’  He redeemed us in order that the blessing given to Abraham might come to the Gentiles through Christ Jesus, so that by faith we might receive the promise of the Spirit.” (Gal. 3: 13-14).

Paul wrote the letters to Galatians, Ephesians, Romans and was an expert on the Torah.  Redeeming the time it seems would be to again obtain possession of that which had been lost due to the passage of time in evil days.  The NIV instead suggest we are to make the most of every opportunity.  Is this because time once lost is lost forever and we can only do our best in the future?  Perhaps, but in the context of the entire scriptures and faith it is not.  God made time stand still and made it go backwards. (Joshua 10: 13; Isa. 38: 8).  Therefore, God is not bound by the laws of nature even as they apply to time and space.  Moreover, in our dealings with people and in circumstances God is able to go beyond anything we can possibly achieve in our own maximized opportunity.  God made distinctions between Israel and all other peoples, Gentiles.  Then, after Yeshua ascended to heaven, He accepted Cornelius, a Gentile, and orchestrated his meeting with Peter, through visions, prophetic instruction, angelic visitation, and Holy Spirit impartation. (Acts 10).  Of course, redeeming the Gentiles was God’s intention from the start as Yeshua’s death on the cross was of such sufficiency that whoever believes will be saved.  As the prophets said the Messiah would be a light for the Gentiles. (Isa 49: 6; Ps. 67: 2; 72: 17).  Also, while Yeshua was in the grave He preached to the souls of men who were then dead. (1 Pet. 4: 6).  So, we see in scripture that redemption is not limited by time.

In our individual lives the Holy Spirit works redemption by restoring what was lost; marriages in shambles are made whole and strong; relationships are healed and revived; prodigals return home and are restored.  Any believer can testify to the power of God to change hearts, transform circumstances, bring reconciliation, hope, and give beauty for ashes.

I believe the Word means we are to redeem the time because the days are evil and only redemption will change evil days, so that they become the day of salvation.  The lies and destruction of the enemy can be undone by Yeshua. Nothing is impossible with God, even redeeming the time.  Joseph was sold into slavery by his brothers when he was young, but years later his prophetic dreams were fulfilled and he became the instrument of God’s salvation to all Israel.  All the time in prison and injustice Joseph experienced was redeemed by God.  To his brothers, Joseph explained, “So then, it was not you who sent me here, but God.  He made me father to Pharaoh, lord of his entire household and ruler of all Egypt.” (Gen. 45: 8).  An often quoted scripture from Romans says, “And we know that in all things God works for the good of those who love him, who have been called according to his purpose.” (Rom 8: 28).  Even through difficult situations God is able to bring about good; through suffering he produces perseverance; perseverance, character; and character, hope.  God’s abundant life-giving righteousness through grace can not be compared with sin.  Where sin increased, grace increased all the more. (Rom 5: 3, 4, 15-16, 20-21).

Finally, I believe the idea of redeeming the time is possible through the unlimited supernatural power of God’s Holy Spirit that dwells within each believer.  When broken, sin worn, evil people come to salvation, surrender and submission to their Lord and Savior Yeshua, Messiah, they are transformed and become a new creation.  The apostle Paul considered himself such a person, referring to himself as the chief of sinners. (1 Tim. 1: 16).  The old man is buried and a new person in Messiah is born again.  If we are born again by God’s resurrection power, through that same power we can redeem the time.  The time Paul spent persecuting the congregation of believers was redeemed by the Spirit in Paul to start many new congregations throughout the entire Roman world.  May you and I redeem the time by the power of God’s Spirit.