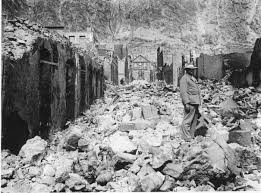 “Be not deceived; God is not mocked: for whatsoever a man soweth, that shall he also reap.” Galatians 6:7.

I recently returned from a cruise to the Southern Caribbean and visited the island of Martinique.  I took a tour of the island which included a stop at the ruins of the former capital of St Pierre.  The town was in the shadow of Mt. Pelee.  This volcano had caused little trouble in the past but in 1902 produced the most devastating volcano eruption in terms of casualties in history, with almost 30,000 being killed.

St Pierre, a region of France, was known at the time of the eruption as the Paris of the West Indies due to its sophistication both culturally and economically, including abundant modern electric lightning.  It was also known as the Sodom of the West Indies.  It was a town rife with prostitution, decadence, blasphemy, homosexuality and unbelief.  Many islanders had been mockers of God.  Over Easter, some had reportedly “crucified” a pig.   The town contained may left-wing radicals with French revolutionary notions.  A few months before the eruption, a story is told of a group of radical atheists that walked up to the top of Pelee where a crucifix was placed atop.  It had been there for over a century.  They threw it into the crater yelling, “Go back to the hell that you created.”

On May 8, 1902 the volcano erupted.  The town had been built on terrain that provided a natural barrier to a lava flow,  directing it to the nearby sea, so an eruption was not feared.  However, this eruption produced a hot pumice cloud (gas and volcanic matter that moves at terrific speed) that fell on St Pierre and killed everyone in the city, except one, within three minutes.  Temperatures inside the city were hot enough to melt gold coins and glass.  Buildings exploded, people were incinerated, and some of those indoors suffocated from the hot air.  One man in a poorly ventilated dungeon cell survived, although with bad burns.

Today, many of the ruins remain with part of the city being rebuilt around it.  Only 5,000 persons occupy the city as it is considered by many a cursed area.  God is merciful and long-suffering but unbelief will be eventually judged – both in this world and the next.