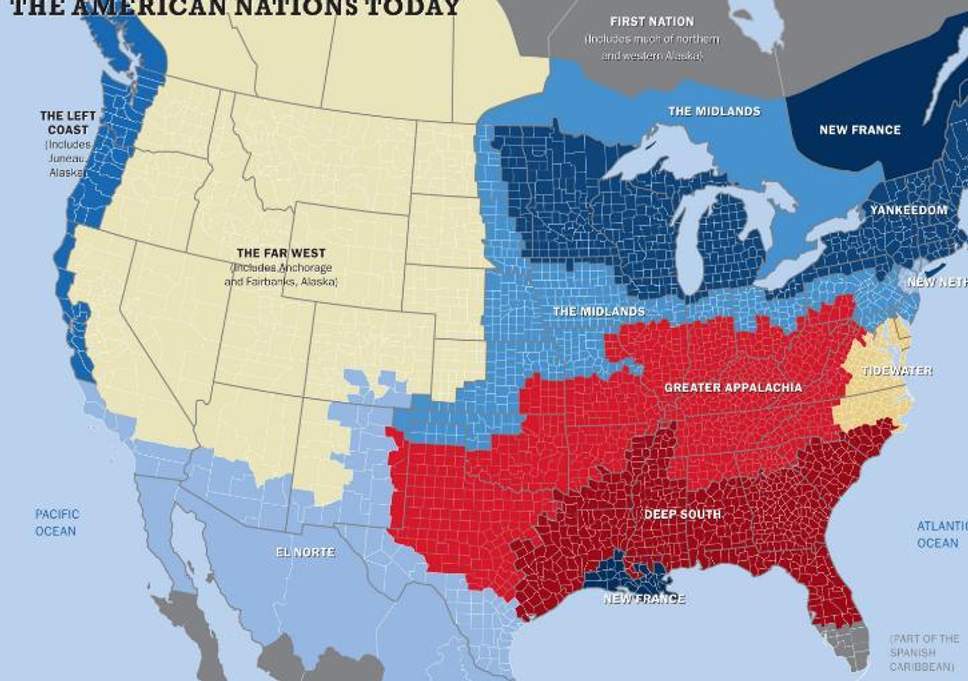 At the height of the cold war, school children regularly practiced getting under their desks at the sound of a loud siren, designating a nuclear attack from the USSR, our bitter enemy. The threat was real and tensions high. As a small child my hope was that the bomb would hit right on us, so I would be spared the ensuing devastation. Many in our country today are locked in a similar struggle of ideas, not with an evil foreign regime, but with their fellow Americans.

The enemy uses division as a means of destruction. America is a combination of vastly different perspectives. The northeast is populated by self-righteous people, that value education, intellectual achievement, communal empowerment, and citizen participation in government as a shield against tyranny. They are comfortable with government regulation. Their associates in the neighbouring regions and west coast have a highly commercial “materialistic” approach with a profound tolerance for ethnic and religious diversity and an unflinching commitment to the freedom of inquiry and conscience. Rounding out those of this mindset are predesessors of these who maintain humanistic self-expression and exploration traits.

A counter culture exists in the South and Mid-west that values personal sovereignty and individual liberty and is intensely suspicious of aristocrats and social engineers. These people oppose the influence of federal government into private lives. This group has a very rigid social structure and fights against government regulation that threatens individual liberty. Others in the nation are leery of government control and regulation, but have differing expressions of individual freedoms, the value of hard work, and self sufficiency.

The lines are drawn most clearly over government control versus private individualism. There seems to be very little middle ground between the perspectives of government control and its influence. A growing division is also centered in religious belief, not necessarily tolerance of different beliefs, but whether such beliefs can coexist with agnostic and atheists views. Anti-religious sentiment is growing and it brings a greater divide between the aforementioned groups. The self-righteous materialistic group welcomes agnostic/atheistic humanism, while the group that values individual freedom, accepts the Humanist as another religion with Mankind as its God, yet staunchly defends their generally deistic beliefs.

The cold war of ideas has escalated tensions, through investigation, outrageous assertions, infiltration, propaganda, breakdown in communication, with weapons locked on target. A failed coup was just uncovered and legal controlling authority is strained to a breaking point. All the while the enemy presses his advantage of division, fanning distinctions in ethnicity, gender, ancestral history, and a myriad of social and cultural distinctions.

There is no common ground, except where we individually recognize our own flawed human nature; how prone we are to evil, and the void of any true goodness apart from external truths contained in our founding documents and the Bible. “I pray that out of his glorious riches he may strengthen you with power through his Spirit in your inner being, so that Christ may dwell in your hearts through faith. And I pray that you, being rooted and established in love, may have power, together with all the Lord’s holy people, to grasp how wide and long and high and deep is the love of Christ, and to know this love that surpasses knowledge—that you may be filled to the measure of all the fullness of God.” (Ephesians 3: 16).

It is up to believers to breach the chasm and restore the foundation upon which this nation is founded, not by conceding truth or with capitulation, but by the Spirit, supplication (prayer), and love for those who treat us as enemies. In addition, for my part, I will turn away for the angst the enemy stirs up toward others. I will recognize my own failure to be “good”, and I will be slow to abhor the sins of others, while minimizing my own. It was a universal saying, America will never fall to an outside aggressor, but from within. Lord, Yeshua have mercy on us.