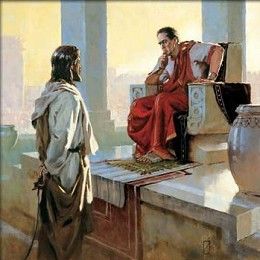 “He entered his headquarters again and said to Jesus, ‘Where are you from?’ But Jesus gave him no answer. So Pilate said to him, ‘You will not speak to me? Do you not know that I have authority to release you and authority to crucify you?’ Jesus answered him, ‘You would have no authority over me at all unless it had been given you from above. Therefore he who delivered me over to you has the greater sin.’ ” John 19:9-11

“Let every person be subject to the governing authorities. For there is no authority except from God, and those that exist have been instituted by God.” Romans 13:1

In these times of “Cancel Culture” and persecution of any opinion outside the woke mob’s view it is sometimes troubling to think about what is on the horizon. If the Liberals continue in control will we face increased persecution from even the government/courts, such as prison or loss of job/income or perhaps someday even death, if we take our stand on Biblical moral issues? Perhaps so, if God allows it, and we can trust His grace to go through whatever He ordains for us if we maintain our faith in Him. However, it is important to remember that no person or government has any authority over us unless God gives it to them from above, all authority being instituted by God. This should give us, as Christians, great peace and allow us to submit to the authorities over us as submitting to God.

I have always found it interesting how, many times, Jesus did not choose to defend himself against authorities who had no interest in listening to the Truth. He had earlier refused to answer questions from Caiaphas, Pilate and Herod and again here to Pilate. We are not to give dogs what is holy or throw our pearls before swine as they will have no regard for the pearls of Truth, treating precious things as cheap (Matthew 7:6). We still submit to authorities, Christ went to the Cross, but we have no obligation to waste time discussing Truth with those who are not interested in it. Give room for God to be our defender (Psalm 62:5-7).

Pilate, proud in his position but troubled by the possibility that there was something special about this Jesus, was offended by Jesus’s lack of an answer. Pilate knew this man was innocent but was afraid to release Him because of the Jewish leaders. Pilate tried to threaten Jesus but Jesus was unafraid as He knew the ultimate source of power and authority.

In this Easter season it is good to be reminded about Jesus’s sacrifice on the Cross for our sins, shedding His blood so we can have eternal life, and also how He conducted himself leading to the Cross. Perhaps a time will come when we will be called before the authorities to answer for our faith and Jesus’s example of how to act, and the reminder that everything is ultimately in God’s sovereign hands is a wonderful guide and comfort.