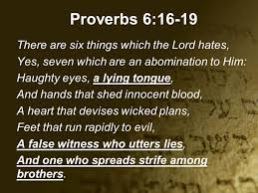 Lately we have seen much dishonesty documented by many of our country’s leaders and even by members of the news media.  This dishonesty is not unique in our history for our establishment leaders but it never ceases to be disturbing to a God-fearing person. Proverbs 6:16 reminds us that God hates a lying tongue.  Psalm 5:6 states that “Thou shalt destroy them that speak leasing (lies): the LORD will abhor the bloody and deceitful man.”  God’s holiness demands… that he punish all liars.  It is not a small thing to be dishonest.

The question often arises as to whether it is permitted to lie when facing extraordinary circumstances – for example when certain persons were hiding Jews and other persons from the Nazis.  In her book, The Hiding Place, Corrie Ten Boom relates an incident in Holland during the Nazi occupation in WWII.  The Nazis were rounding up young men for forced labor at munitions factories.  Corrie was visiting with her sister-in-law, Nollie, when her two nephews, potential labor candidates, came rushing into the house with ashen faces wanting to hide because the Germans were coming.

Nollie had a small potato cellar under the floor.  Quickly, they opened the trapdoor and the two boys jumped in.  They covered the trapdoor with a rug, and the kitchen table was placed over the spot.  Suddenly, the Germans burst in with rifles leveled, commanding everyone not to move.  They asked Cocky, Corrie’s niece and the sister of the hidden brothers, where the boys were.

The family had been brought up as Christians.  As such, they were taught never to lie. Cocky tried evading and stalling, but the soldier pressed her.  Cocky continued to stall.   Again, they asked, “Where are they?”

It would not have been unusual for the Nazi’s to take Cocky away just for the perceived of insult.  It was incredible that they did not investigate further but rather abruptly left. Nollie had always taught her children that “God honors truth-telling with perfect protection” and indeed he did in this case.

Some may argue that the act of hiding the boys under the table was itself dishonest but we are not obligated to tell all we know and Cocky could have honorably refused to answer and accepted the consequences.  I see no provision in the Scriptures that allows for telling a “situational ethics” lie or being dishonest in any other way.   Our duty is to obey God and leave the consequences to him – “lying lips are detestable to the Lord, but faithful people are his delight.” – Proverbs 12:22.